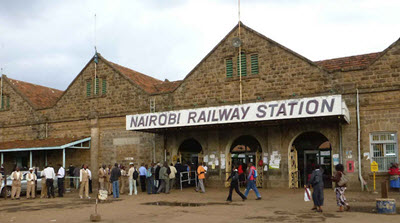 Nairobi railway station is a station on the old metre-gauge (narrow-gauge) railway line that used to provide services from Mombasa to the Ugandan border, via Nairobi. When this railway was built in 1896-1901, it was known as the Uganda Railway. The first Nairobi station building was created in 1899. It was pretty basic, and it would need to go through notable changes throughout the 20th century as the Nairobi stop received more and more traffic.

In 2017, a new standard-gauge railway (SGR) was inaugurated for travel between Mombasa and Nairobi. This railway uses another station for its Nairobi area stop; the Nairobi Terminus which was built specifically for this new line in Syokimau, roughly 20 km from Nairobi’s central business district.

The Nairobi Railway Museum is adjacent to the Nairobi railway station.

The museum was established by the East African Railways and Harbours Corporation in 1971 to preserve and display the history of rail travel not just in Kenya but in the whole of East Africa.

Three operational steam locomotives are kept here, but you need to book an appointment in advance to see them because they are normally covered up. The museum’s collection also contains early diesel locomotives and passenger coaches.

Rails run from the main railway and into the museum part, which makes it possible to take old restored steam locomotives out on excursions, e.g. to the metro Nairobi area or even all the way to Naivasha and Konza.

One of the old steam locomotives in this museum was used in the 1985 movie Out of Africa, the 7 Academy Award-winning drama film loosely based on Karen Blixen’s autobiographical book of the same name.

The museum holds a W.G. Bagnall locomotive called Hugh F Marriott, which was built in Stafford, England, in 1951. Once upon a time, this engine operated a switcher at the Magadi Soda Company in south-western Kenya.

Since 2011, the museum has had a working miniature railway.