The Mombasa-Nairobi Standard Gauge Railway (SGR) was inaugurated on 1 June, 2017, connecting the port city Mombasa in eastern Kenya with the capital Nairobi in the interior of the country. 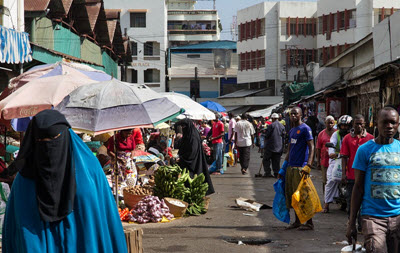 The Mombasa-Nairobi SGR generally runs parallel to the old narrow-gauge Uganda Railway built in the late 1800s and early 1900s, when the region was still under British colonial rule.

The very first fare-paying passengers traveled on the Mombasa-Nairobi SGR on 1 June 2017. In Kenya, 1 June is Madaraka Day, a national holiday commemorating the day in 1963 when Kenya seized to be a British colony.

Traveling from Nairobi to Mombasa

On the old narrow-gauge line, the train trip from Nairobi to Mombasa would typically take anywhere from 16 to 24 hours. When the new standard-gauge railway opened in 2017, it suddenly became possible to go between Nairobi and Mombasa in as little as 4 hours and 45 minutes on the non-stop Intercity Train. There is also a Country Train that takes a little longer since it stops at eight intermediate railway stations along the way.

At the time of writing, you can choose between 1st class and 2nd class tickets for the ride. Among other things, paying for a first class ticket will give you access to a special 1st class buffet car with table seating.

The modern trains have big windows for travelers to enjoy the view, and if you’re lucky, you will get to see some game as you pass the Kapati Plains and the Tsavo National Park.

Since the Nairobi – Mombasa SGR is a part of the Northern Corridor Integration Project (NCIP), it adheres to the Chinese National Railway Class 1 standard for railways, as the adoption of the common standard makes it much easier to connect the railways of the NCIP countries with each other.

On its way from Mombasa to Nairobi, the railway passes through many areas with rough and hilly terrain, as well as areas where there is a need for special protection of the surrounding wildlife and nature. To handle all this, bridges, viaducts, cuttings and embankments were created as a part of the railway project – including no less than 98 different bridges! 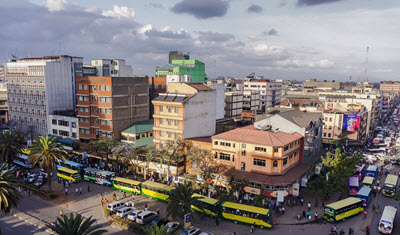 This means that even though the new SGR often runs parallel to the old narrow-gauge railway, there are also many places where other solutions have been opted for than those selected back when the narrow-gauge railway was built (it was completed in 1901). The old narrow-gauge railway did, for instance, handle the hills near the Mazeras township in the Coastal Province by going through a spiral, while the modern SGR passes through this area on two bridges instead, of which one is over 43 meters high – the highest of all the bridges on the Mombasa-Nairobi SGR route.

Another notable bridge built for the SGR is the 2.6 km long Anthi River Super Bridge near Nairobi. At the time of completion, it was the 6th longest bridge in Africa.

The project became a reality through a collaboration between Kenya and China, where the China Road and Bridge Corporation was appointed the prime contractor for the project. The number of residents hired for the projected amounted to about 25,000 people.